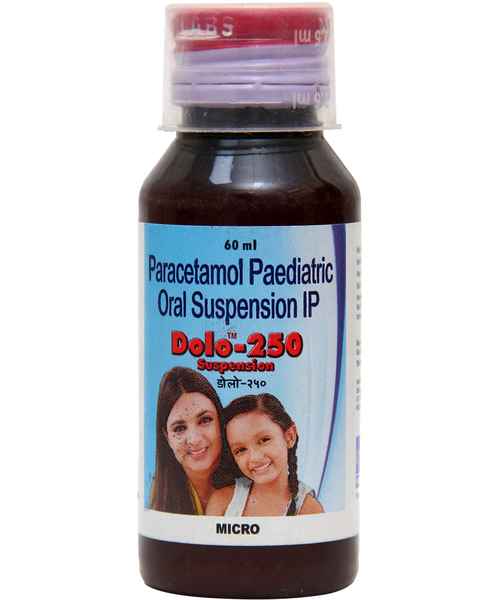 Inclusive of all Taxes

Also available at the
following stores near you

Dolo Suspension 250mg 60ml is most commonly used to treat fever and mild to moderate pain such as muscle ache, headache, toothache, arthritis, backache, menstrual cramps, and post-immunization pyrexia. However, the uses mentioned here are not exhaustive. There may be other conditions for which this medication may be used upon a doctor’s discretion.

Mechanism of Action of Paracetamol/Acetaminophen

Paracetamol (or Acetaminophen) primarily acts as an analgesic and antipyretic agent. Further, it also has anti-inflammatory properties to a certain extent. The Paracetamol produces its analgesic effects by increasing pain threshold and shows its antipyretic property by acting on the hypothalamic heat-regulating center.

Patients with the following conditions are suggested to seek advice from their health care professionals before taking the Dolo Suspension 250mg 60ml:

Side and Adverse Effects

The following side effects may or may not occur during the usage of Dolo Suspension 250mg 60ml. It is generally well tolerated when taken in the prescribed dosage guidelines. More common ones are generally mild and may include:

Rare but more serious adverse effects may include:

Do not exceed the dose prescribed by your doctor, or follow the directions given on the bottle or container.
Dolo Suspension 250mg 60ml is meant for oral administration. Shake the bottle well before consuming.
Dosage can be administered with the cap that comes along with the Suspension container.

Avoid missing or forgetting a dose. If you do, take it as soon as you remember; but if it is almost time for your next dose, skip it and take it according to your normal schedule. Don’t consume two doses at the same time which is dangerous to your health.

Dolo Suspension 250mg 60ml may be taken with or without food.

Do not take more than 4 doses in 1 day or within any 24 hours of the period, do not use for more than 3 days at a time except on a bit of medical advice.

Avoid taking more than the prescribed dosage. In case of an accidental overdose, promptly seek medical advice. Depending on the dosage, symptoms may vary but you may experience one or more of the following signs or symptoms:

Take the Suspension only on the advice of a medical practitioner. Dosage adjustment or complete avoidance of the medication may be required in the following conditions:

Caution advised among people with renal problems. If you have any, it is highly recommended that you consult your doctor before the consumption of this medicine.

Caution advised among people with hepatic problems. If you have any, it is highly recommended that you consult your doctor before the consumption of this medicine.

This may be used during pregnancy – no known risk of fetal harm.

This drug may be used while breastfeeding – no known risk of infant harm, based on human data. And no human studies available to estimate effects on milk production.

Do not take Dolo Suspension 250mg 60ml along with alcohol as it may increase hepatic risk.

Category B: Animal reproduction studies have failed to demonstrate a risk to the fetus and there are no adequate and well-controlled studies in pregnant women.

What is Paracetamol for:

It is used to used to relieve mild to moderate pain and to reduce fever.

How does Paracetamol work:

Paracetamol blocks chemicals that cause pain. It lowers fever by changing the bodys thermostat in the brain.

How should Paracetamol be used:

Take this as directed by your doctor. Do not take more than instructed by your doctor. Never take more than 1000 mg at any one time and no more than 4 times in one day. The dose for a child is different from the adult dose. Be sure to check with your doctor or pharmacist before giving this medicine to a child. It may be taken with or without food. If you need pain relief fast, take it on an empty stomach as food may slow down the absorption. You may stop taking it when you have no more pain or fever. Take it only when you need to.

Common side effects of Paracetamol :

Upset stomach or throwing up. Harm to the liver may rarely happen.

What do I do if I miss a dose

Many times this drug is taken on an as needed basis.

What precautions should I take when taking Paracetamol :

Do not take this drug if you had an allergy to this or similar drugs in the past. Do not take it if you have liver or kidney failure.

When do I need to seek medical help

Seek help if you are having an allergic reaction to the drug. Signs include rash, difficulty breathing, swelling of the lips, face, tongue; or hives. Symptoms of an overdose may include nausea; vomiting; loss of appetite; sweating; extreme tiredness; unusual bleeding or bruising; pain in the stomach; yellowing of the skin. Contact an emergency centre immediately if you suspect overdose.

Can I take Paracetamol with other medicines:

Alert your doctor if you are taking blood-thinning medicines such as warfarin.

Are there any food restrictions

How do I store Paracetamol :

Store in a cool, dry place away from the reach of children. - Medicines must not be used past the expiry date.

Not Available in any nearest stores